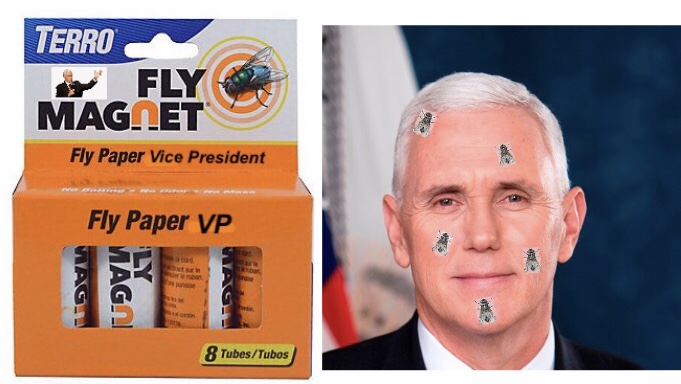 ST. LOUIS, MO — Officials from Terro have announced a new line of Vice President Fly Paper in the wake of Wednesday’s fly incident at the Vice Presidential debate.

“While we are sorry for the embarrassment this may cause the Vice President, the fact of the matter is that the Flygate incident has brought national attention to this common household pest, and we are America’s premier pest control company,” said Terro spokesperson Rudy Potarskie.

Terro product development researchers discovered that Mike Pence is able to attract flies at a rate higher than any existing Terro product as well as most kinds of dung.

“This guy clearly gives off a strong odor or some kind of foul presence. We were astounded by how well our new Mike Pence formula performed against all other materials, including a giant pile of fresh elephant crap,” Potarskie continued. “The flies went apeshit over this stuff like we’ve never seen.”

Published data from Terro shows that the Mike Pence formula attracted flies within four seconds, which is approximately half the time it took rotting garbage and one third of the time it took the Vice President to lose his audience and be reduced to a ridiculous meme during the debate.

Though Terro would not provide any hints as to what ingredients make up their new formula, insiders believe it to be a combination of Werther’s candies, pine scented air fresheners, baby powder, sweaty knit pantaloons, and the feeling of being judged by a smug, self-righteous asshat.